Carl performs so many different tasks at Site-Seeker that it’s hard to give him a title. That’s why he’s simply dubbed our “Internet Marketing Strategist.” Carl is everyone’s go-to guy when there is a problem. Whether it’s hardware, software, client support or a personal hang-up (how much should I put in my 401k again, Carl?). He will either have the answer or work his hardest to find it.

Carl earned his degree in technology from SUNY Morrisville and held an IT support position at Hamilton College before joining Site-Seeker in 2008. In addition to maintaining the SSI server and keeping all of our computers working, he’s instrumental in strategic planning and a wizard in Google Analytics.

Carl is an avid bicycle enthusiast, participating in dozens of events each year. When he’s not biking, he enjoys playing with his dog, or trying out new restaurants in Burlington, VT where he lives with his wife. 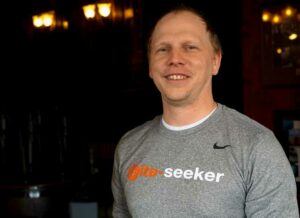